As a group of concerned bariatric surgeons and leaders in our field, in our communities, in our states and in the national societies, we would like to share our perspective on adjustable gastric banding (AGB), a misunderstood surgical procedure for weight loss that has helped hundreds of thousands of patients since its original introduction in 1993.

To start, we would like to offer some clinical background: Obesity is a chronic disease in need of long-term, often lifelong, treatment. To date, bariatric surgeons have been unable to identify any single surgical procedure that, without resulting in lifelong nutritional deficiencies, would offer durable results beyond the first few years after surgery. If such an operation existed, we would perfect the technique and offer it to all of our patients at a young ae, and that would be all the patients would ever need. However, much like treatment of other chronic diseases—such as coronary artery disease and osteoarthritis—multiple interventions during the life of a patient are needed. And the most prudent approach would start with least invasive interventions and extend to more invasive surgical procedures, in an orderly fashion.

The article in General Surgery News is based on a report published in JAMA (2017 May 17. [Epub ahead of print]). This report simply suggests that it costs a lot of money when AGB patients undergo subsequent surgical interventions. What the authors have failed to offer is a reasonable comparison between cost of subsequent operations after initial AGB versus after other primary bariatric operations, such as sleeve gastrectomy or gastric bypass surgery.

In fact, the report has left us with more questions than much-needed answers:

The JAMA article suggests that 81.5% of all patients who underwent AGB since 2006, with a mean follow-up of more than four years, required no further surgical interventions whatsoever. These results are the most impressive among all published data in the English language and are unparalleled when compared with results for all other bariatric interventions. We wonder why such incredibly positive results are published with a negative undertone. 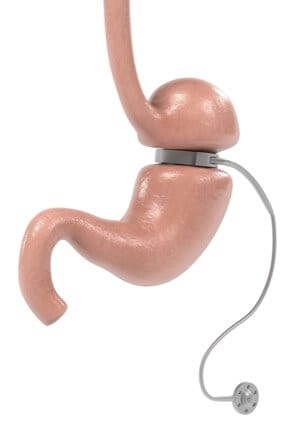 We question the entire premise of the JAMA report. The motives for this investigation remain unclear to us. Imagine what would happen if the legitimacy of coronary artery angioplasty with stent placement were to be judged by the cost of future additional endovascular interventions and/or open-heart surgery. Using the logic offered by the investigators, we should stop offering angioplasty and stents to all cardiac patients and proceed to coronary artery bypass grafting (open-heart surgery) from the start.

The data presented remain unclear and ambiguous to us. The authors reported that among the 18.5% of patients who underwent additional interventions following AGB, the mean number of procedures was 3.8, and some patients had as many as 12 subsequent operations. Since the patients of most proponents of AGB often undergo either only one additional operation (removal of the band with or without simultaneous conversion to an alternative bariatric procedure) or two (removal and conversion to another operation at a later date, or revision and subsequent removal of the original band at a later date), we can only speculate on the reasons for the highly unusual data:

Without similar data presented for other primary bariatric procedures, we believe the publication of the report in JAMA was entirely premature and misleading. Imagine how different our conclusions would have been had we looked at cost of follow-up interventions for Medicare recipients undergoing gastric bypass surgery with no similar results available for patients undergoing sleeve gastrectomy or AGB.

Is there any doubt that subsequent surgical procedures on AGB patients are costly? Absolutely not. Should we, therefore, conclude that AGB should not be reimbursed by Medicare and other payors? Absolutely not. AGB remains one of the safest and most effective bariatric interventions that is both adjustable and easily reversible due to its anatomy-preserving nature. It would be a great disservice to dissuade the self-educating public through publication of such inflammatory reports based on inaccurate and misinterpreted data.

In summary, we are disappointed by the misleading report and the misguided conclusions of the paper. We are equally disappointed with JAMA for accepting this report for publication without paying attention to the details of the data presented. And we are grateful for General Surgery News for having given us the opportunity to provide a much-needed second opinion on the utility of one of the most effective surgical procedures for treatment of morbid obesity.